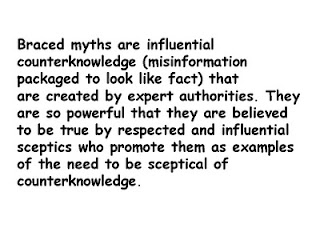 In 2010 I discovered a problem that seems to have stemmed from orthodox experts engaging in unscholarly attempts to identify and bust myths. I discovered this problem while fact checking a most famous story of the impact of bad data on policy making.
I named the phenomenon the Braced Myth and defined it as precisely as I could.
Note: Braced Myths are started by orthodox experts and are then braced by orthodox expert sceptics who - by way of their own scholarship - think they are true and so use them, with painful irony, as examples of the need to be healthily sceptical.
Are you aware of a case where orthodox experts have created myths, fallacies, pseudo scholarship or other junk science that has then been believed by experts who, with unintentional irony, in turn, used it as an example to support the need to be sceptical of 'bad science', pseudo scholarship and other counterknowledge? As you can see, what I am looking for has three very specific components (1) the creation of a fallacy, myth or error by an orthodox expert and (2) it being used by another expert who in turn promotes it as being ‘true’ and (3) promotes it as a good example of the need to be healthily sceptical of that which is not so.

I suspect that braced myths are likely to be quite rare. But once found, each one will most certainly be a case of the most exquisite irony.

To date, I have found two examples where this has happened, which it led me to name them Braced Myths:
In 2011 I found my second braced myths. Both are in criminology.
What is the Social Significance of Braced Myths?
To seek to gauge the social significance of Braced Myths I am looking for further examples from any field of knowledge.
I would be most grateful if anyone could kindly let me know of any others. Email: drmikesutton@hotmail.com

The Problem of Zombie Cops in Voodoo Criminology: A Criminological Braced Myth about Beat Patrol Policing is Busted

My recently updated and more detailed article entitled: The Problem of Zombie Cops in Voodoo Criminology can be found on the peer-to-peer Best Thinking site.

I recommend such web sites to anyone wishing to assert the provenance of their ideas prior to presenting them at conferences and in peer-reviewed publications. 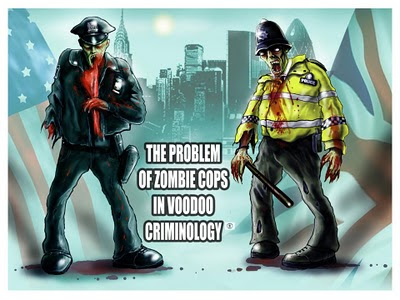 Always remember when creating zombies in voodoo criminology: What you don't know can eat you!

Note: The Zombie Cop picture shown here was commissioned by me from the artist Marcus Jones. (Copyright Dr Mike Sutton: Not to be used without my express written permission). Marcus can be contacted via his online gallery website http://marcusjones.daportfolio.com/