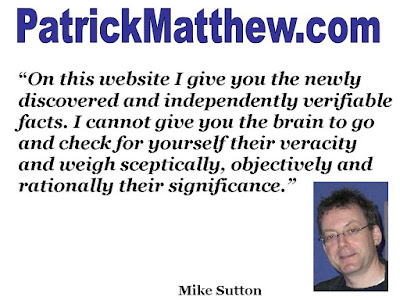 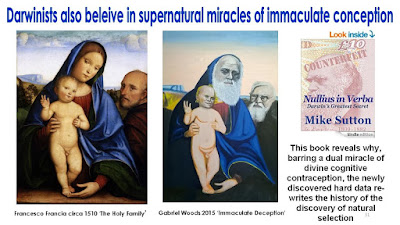 What has been newly discovered in Nullius in Verba: Darwin's greatest secret    that changes everything we thought we knew about the discovery of natural selection?
Before the publication of Nullius, Darwinists simply believed their namesake and Alfred Wallace when each claimed to have discovered natural selection "independently" of Patrick Matthew's prior published theory. They held this mere belief because none had looked behind Darwin's (1860) excuse for replicating Matthew's prior published unique discovery that : "I think that no one will feel surprised that neither I nor apparently any other naturalist had heard of Mr Matthews’ views..."
So what did I uniquely discover to prove the rational improbability that either or Darwin or Wallace discovered natural selection independently of Patrick Matthew's prior publication of the full hypothesis? And what did I uniquely discover to prove Darwin and Wallace were not at all the honest and humble scientists portrayed in the literature - but were instead egotistical self-serving liars?
1. Darwin lied when he wrote in his defense in the Gardeners Chronicle in 1860 that :"...neither I nor apparently any other naturalist had heard of Mr Matthews’ views..." because Matthew told him in the letter to which Darwin responded with that lie that John Loudon had written a review of his book. Loudon - a noted botanist and fellow of the Royal Society and the Linnean Society (amongst others) had been dead 16 years by then. But Darwin knew he was a naturalists because his notebook of books read was jam packed with Loudon's books (often heavily anotated). And that same notebook showed that Darwin had held in his hands at least five publications that cited Matthew, two of which were written by Loudon. Moreover, Darwin had his best friend the botanist Joseph Hooker approve his letter containing this lie and then send it on his behalf to the Gardener's chronicle. Joseph Hooker also knew Loudon was a naturalist. In fact he had earlier written that Loudon was better than any other in Europe. This is the same Joseph Hooker who had in 1858 worked with Darwin's other great friend and mentor Charles Lyel to slyly mislead the Linnean Society into believing Wallace had given his consent to have his paper read before them and then published with Darwin's. Wallace's paper they read along with (but after) Darwin's so that it would thereafter be called Darwin's and Wallace's theory. Darwin continued his lie that Matthew's book had gone unread (despite Matthew telling him in his second letter to the Gardener's Chronicle of other naturalists besides Loudon who had read it) from the third edition of the Origin of species and in a letter to the eminent French naturalist Quatrefages de Bréau (April 25, 1861   ).
2, Had any Darwinists - who society relies upon to tell the veracious story of the discovery of natural selection - not simply swallowed Darwin's story- hook, line and "Hooker" - noticed Darwin's great lie that no naturalist had read Matthew's book pre 1860 then they might have investigated whether or not what Loudon did as a naturalist might be important in the veracious story of the discovery of natural selection. Had they done that then they would have discovered that Loudon did far more than write in his 1832 book review that Matthew may have written something original on "the origin of species", because they would also have found what I uniquely discovered: namely, that Loudon edited two of Edward Blyth's influential papers on the evolution of species and varieties of organic life; papers which definitely influenced Darwin - because he wrote from the third edition of the Origin of Species onward that Byth was his most important and prolific informant on the topic.
3. To further uniquely bust the myth that no naturalist read Matthew's (1831) prior published hypothesis, I uniquely discovered six more naturalists actually cited it in the literature before Darwin's and Wallace's papers were read before the Linnean Society in 1858. Darwin knew four of them. And Darwin and Wallace were influenced and facilitated by two of those naturalists.
4. Wallace misled the world in his autobiography by slyly deleting incriminating text in his transcription of his letter to his mother where he had written that following what Darwin, Lyell and Hooker had done at the Linnean Society with his work that he was owed "assistance" by Darwin and his associates. And he did indeed receive a great deal of financial and social "assistance" from them thereafter.
5. Darwin told a further five lies that mislead the world into crediting him with priority over Matthew for the Originator's unique discovery.
6. Matthew was the first to use powerfully simple Artificial versus Natural Selection Analogy of Differences to explain the complexity of natural selection. This is probably the most important explanatory analogy ever published in the history of humanity. Loren Eiseley (1979) had earlier discovered that Darwin's unpublished (1844) replicated Matthew's (1831) plants grown in nurseries versus those growing wild analogy of differences to explain the operation of natural selection. What none before me picked up on is that Darwin (1859) opened Chapter 1 of the Origin of Species with Matthew's unique explanatory analogy:

'When we look to the individuals of the same variety or sub-variety of our older cultivated plants and animals, one of the first points which strikes us, is, that they generally differ much more from each other, than do the individuals of any one species or variety in a state of nature. When we reflect on the vast diversity of the plants and animals which have been cultivated, and which have varied during all ages under the most different climates and treatment, I think we are driven to conclude that this greater variability is simply due to our domestic productions having been raised under conditions of life not so uniform as, and somewhat different from, those to which the parent-species have been exposed under nature.'

7. Wallace replicated that exact same analogy of differences in his 1858 Ternate paper, which was read after Darwin's before the Linnean Society in 1858.
8. Using new technology of Big Data analysis, I was able to determine - out of over 30 million publications in Google's Library Project - which terms and phrases in his 1831 book were apparently coined by Matthew and who was then apparently first to be second to use them in print. I discovered many naturalists well known to Darwin and his closest associates who were apparently first to be second with apparently unique Matthewisms. Surprisingly, five out of only 25 people in the entire world discovered in this way were naturalists well known to Charles Lyell. This method also uniquely revealed that Chambers was first to be second to replicate Matthew's unique term for his discovery 'natural process of selection' and that Darwin uniquely four-word-shuffled that term into its only grammatically correct equivalent 'process of natural selection', which he used nine times in the Origin of Species(1859).

In addition to these unique discoveries that mean highly influential knowledge contamination from Matthew to Darwin and Wallace is now rationally proven far more likely than not, I have uniquely unearthed a plethora of clues as to where to look next for printed or hand-written 19th century evidence that Darwin was aware of Matthew's book pre 1858. Namely, in the correspondence, notebooks, published and unpublished work, and private diary archives of those I discovered cited or else were apparently first to be second with apparently unique Matthewisms before 1858 - and also in the diaries, notebooks, published and unpublished work and private correspondence archives their friends and associates.
Posted by Dysology at 03:56