Immaculate Conception: An Analogy in Oils by Gabriel Woods

This oil painting, by the Nottingham based British portrait artist Gabriel Woods, showing Darwin holding Patrick Matthew as his own child. 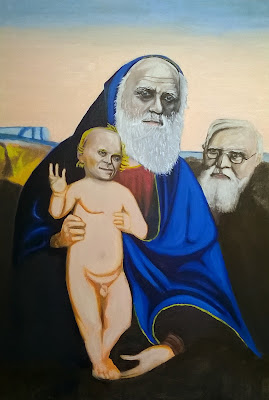 Paying satirical homage to religious pictures of the Virgin Mary and child, this is a mesmerizing pictorial analogy of Darwin's and Wallace's claims to have each conceived the theory of natural selection independently of Patrick Matthew's (1831) prior published book, which expert Darwinists agree    contained the full theory 27 years before Darwin's and Wallace's papers were read before the Linnean Society in 1858.
In the words of the artist Gabriel Woods (May 2015) in his explanation for his portrait "Immaculate Deception":

"The picture represents Charles Robert Darwin and Alfred Russel Wallace who both claimed, they each independently discovered the theory of natural selection with no prior knowledge of Patrick Matthew's earlier work. Patrick Matthew is represented in the allegorical painting as the infant " 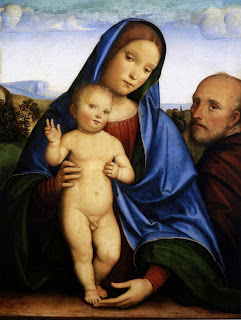 The picture was commissioned, in light of new data (Sutton 2014) that proves naturalists well known to Darwin and Wallace read and then cited Matthew's book before going on to play roles at the very epicenter of influence on the pre-1858 work of Darwin and Wallace on natural selection.
The Blessed Virgin St Mary's conception of Jesus of Nazareth, is a miracle because she became pregnant with the child of "God" whilst surrounded by men who were fertile to some unknown degree. The analogy is perfect because so too were Darwin and Wallace surrounded by man whose brains were fertile - to some unknown degree - with Matthew's unique ideas. Therefore, in the final analysis, if Darwin and Wallace did not conceive Matthew's unique discovery, name for it, examples of it in nature, and his artificial versus natural slection analogy of differences to explain it, by some kind of 'knowledge contamination,' then they must surely have each been mysteriously endowed with a miraculous and divine cognitive contraceptive device (MAD CCD).
"Immaculate Deception" is a painting after "The Holy Family" by Francesco Francia, 1510.

Find out more on the story behind Woods paiinting here
Posted by Dysology at 10:36